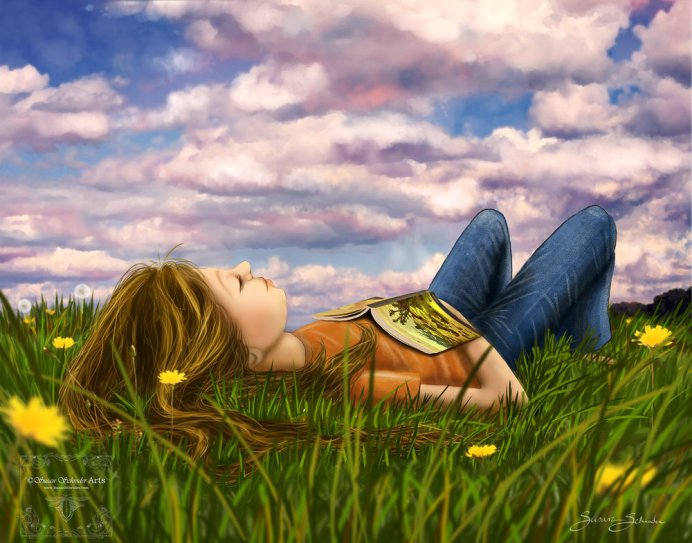 I remember when I was young and living out on the farm, going into the field and laying down in the tall weeds, just gazing at the clouds in the sky.  I don’t remember what I thought about but I do remember how pleasant and peaceful it was.  The world seemed right, out there in my little patch of serenity listening to the cicadas, birds, crickets, the occasional lowing of a cow , and the rhythmic sound of the water pump down at the pond.  I remember Great Grandma Burley telling me when the breeze blew through the trees causing their branches to gently sway, that right there was God speaking to me and if I was very quiet, I could hear Him. Trees became fascinating to me.

My affinity for the comfort of trees extended to a weeping willow on the school playground; while underneath, the teacher would find me and tell me to come out and play with the other kids. I really didn’t want to.  When I was about 8 years old and exploring the yard on the farm, I stopped in front of a tree which I think was an apricot tree, and just stood there gazing at it for the longest time as the breeze blew through the leaves. Don’t ever let anyone tell you that moments like this in nature can’t bring you to God because it was at that moment I became fully aware of the Holy Spirit, my soul, and my mortality.  While I was aware of God, Jesus, and the Holy Spirit, I really didn’t know what to do with them! Mom had provided me with a very basic Christian instruction through books and Sunday school but as time passed, our church attendance was sporadic and finally there came a time when I refused to go and she let me.  I loved Mom but I sure wish she had made me continue going to church when I was a kid.  I’ve had to learn to discern the voice of God when all around me is noise, and the stillness I crave is taken in bits and pieces through discipline. I took the long, hard way to this point.

Spring forward to August, 2018. I’ve just taken a two week break from Living Stone Christian Fellowship,  my Christian ministry page I’ve had for several years on Facebook. While I did take a six month sabbatical in 2015, for the most part I’ve been consistent in posting and ministering in prayer requests.  LSCF has been my main ministry for the last three years. At times I’ve wondered if this was a productive or even real ministry or if I was just spinning my wheels for myself.  I will admit, many of the posts have affected my personal understanding of the Christian walk and that is why I wanted to share them with others.  So many of our ministries are born from our own adversities and experiences; is that not how we turn lemons into lemonade, so to speak?  We help because we have been helped, we love because we have been loved, and we share the hope of Jesus Christ because we know what is to be hopeless. This is what real ministry is all about.  It’s not about knowledge, numbers, and participation because sometimes we just don’t know how or who we have ministered to just by being there; consistently and faithfully plugging away with what God has called us to do on His behalf for His people.  My understanding of the need to acknowledge this deficit of feedback and reward is my lesson in humility and dependence on God and His will for my life.  He is everything.  He is the reason.  He is the way.  He is good.  He is never wrong. He never fails.

I will be continuing on with the Living Stone Fellowship page in a slightly different format, not because I think it will appeal to more people but because I’m letting God take the lead and I won’t be offering an explanation when a change of format occurs. And if I am the only one who gains from this page?  To quote an oft used and worn out phrase….”If it helps even one person, it will be worth it”.

I am a Christ Follower, Wife, Mother, Writer, Reader, Framer, Calligrapher, Cook, and Gardener living the dream in Oklahoma after thirty-five years in Colorado! I love my life and am grateful for every experience, including the challenges alongside the joys, that have molded me into the person I am and hope to be for God's glory always. View more posts

2 thoughts on “THOSE QUIET TIMES”